The kennel was founded by F.C.I. (Federation Cynologique Internationale) in year 2000. under prefeix KAN TRACE, owned by Natalija Kalečak Radovanović. From May 2016, kennel is owned by Sabina Zdunić Šinković  and  Natalija Kalečak Radovanović, and it`s settled in Rijeka, Croatia. Today is KAN TRACE kennel one of the most succsessful kennels in Croatia and it`s a home of  World and European winners, BIS and BISS winners, but what is most important, home of healthy and happy dogs. 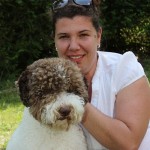 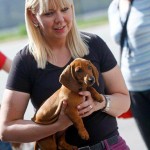 We were are breeding 4 breeds: Lagotto Romagnolo, Weimaraners, Dachshunds SS and Petit Basset Griffon Vendeens, but at the moment only Lagottos and PBGV`s.

Our first Lagotto came in year 2000. from Italy, Cry Out kennel,  this was Cry Out Carisma, the very FIRST Lagotto in Croatia. Holly won our hearts and we decided to start breeding. Since then we bred numerless champions, world and european winners and Best In Show winners on some of the most important shows in Europe and all arround the world. We are especialy proud on our Kan Trace at Greydove (exp. In Australia) that was first Lagotto ever that won Best In Show in Australia, first Grand champion in Australia and 4 years in a row TOP Lagotto in Australia. You can read more about our Lagottos on their pages.

Our first weimaraner was Steadlyn Alexander.  Blink came in year 2001 from Italy, Steadlyn kennel. After Blink we imported 2 bitches from Australia, Greydove kennels. Our first litter was in 2006. out of our Australian imp. Greydove at Kan Trace, and from „A“ litter we have TOP junior and adult dog ALL BREEDS `08 in Croatia, BIS puppy at EDS `07, multi champions and multi JBIS and BIS winners. Since than we had few more litters from which we have now dogs that are winning all over Europe and making us proud. You can read more about our weims and their results on their pages.

In year 2003. , in our home came one beautiful Dachshund SS female Bossa od Bencica. We fell in love with her temperament and she was our foundation bitch. She produce one of the most winning SS Dachs WW, EW, BIS Kan Trace Bad Luck and JEW, JWW, WW Kan Trace Blueberry. Now her children and grandchildren become one of the most winning Dachs in Europe winning 7 years in the row on European and World dog shows. More about our Dachshunds on their pages.

In 2008., after a long searching, in our home came our first PBGV from USA, Am.Ch Afterglow BonAppetite DeCharlen (bred by M. Gadsby & J. Lynn).After wins in States, Pucci did it also in Europe, winning all arround the Europe his titels and hearts of the judges.One year after his arrival, Ante and some other friends, decided to give one perfect wedding present to Natalija and her husbend Tvrtko. This is how our Afterglow Emma Peel arrived from United Kingdom, Afterglow kennel. Puccita was also winning the hearts and looks from lot of judges with her sweet and happy temperament, but also with her beauty. In year 2011 we had a first PBGV litter out of „Pucci“ and „Puccita“. We keept their daughter Kan Trace All I Do Is Win „Puccolina“, that was alredy at her first show in baby class Best Baby In Show and on WDS 2012 she was 3rd Best Puppy In Show.You can find more about our “Puccic family” on PBGV`s pages.